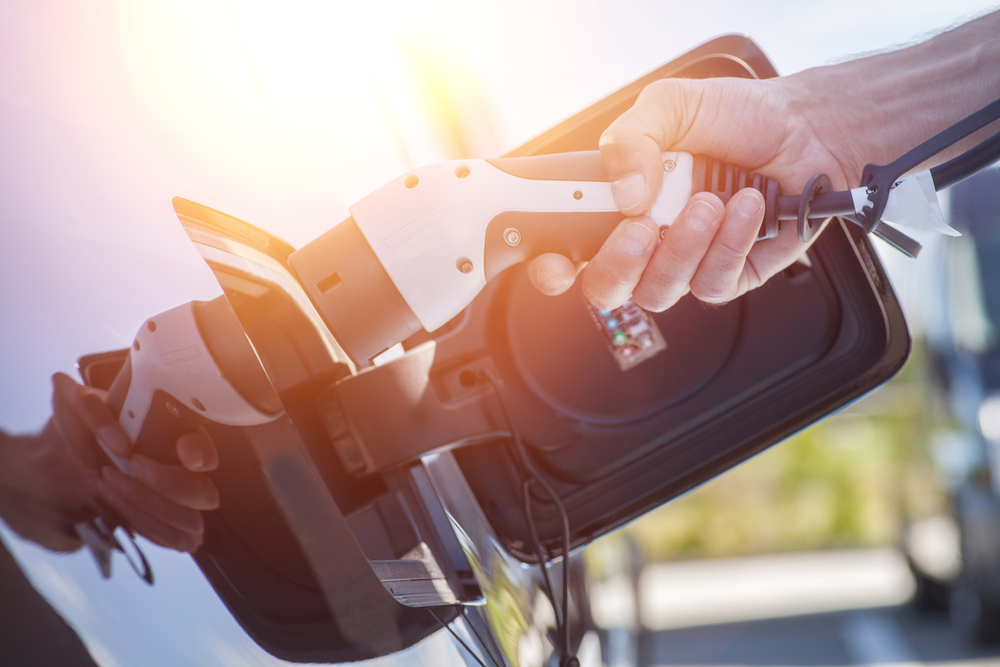 Electric vehicles (EVs) are getting more and more popular around the world. And it’s easy to see why. They provide a greener and more efficient alternative to some of the vehicles currently dominating our roads. But not everyone is convinced by them, with many drivers giving electric cars a wide swerve when it comes to choosing their next vehicle.

With all of this in mind, we decided to dig deeper into the thoughts and opinions of drivers in Britain and beyond. Our focus was on the reasons why people would or wouldn’t make the move to electric. We also looked at how some commonly held negative opinions are in fact misconceptions, and how these are keeping electric vehicles from becoming the car of choice.

Combining the British and international results, we found that 83% of respondents said they would consider purchasing an electric vehicle. This is a sizeable majority, but still leaves almost one fifth of drivers (17%) who wouldn’t want to go electric.

In terms of gender, men are more open to purchasing electric vehicles, with 87% welcoming the idea. This can be compared with a lower proportion of women, at 78%, who would consider an electric car.

When it comes to age groups, our survey found that millennials are the most open to EVs, with 91% of the 25-34 demographic saying that they would consider them. The 55-64 group, on the other hand, responded positively only 32% of the time. 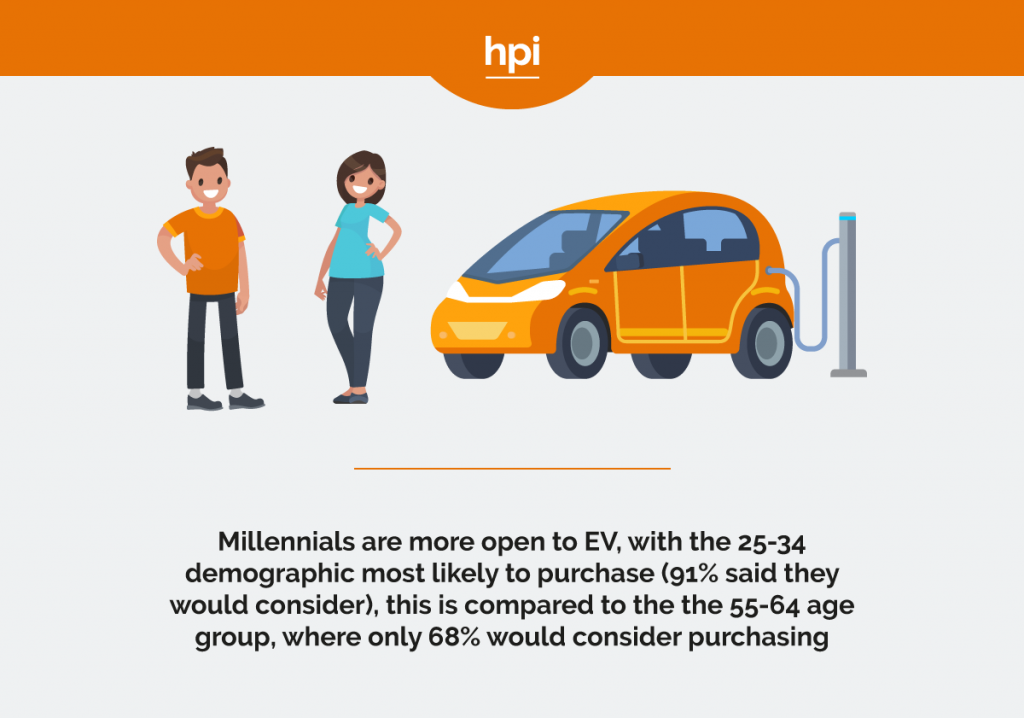 The UK city where people are most likely to adopt electric cars is Edinburgh, with a 94% positive response rate. This is closely followed by Sheffield, Manchester, Bristol and London. Interestingly, these are all prominent university cities, perhaps suggesting a link between high levels of education and a willingness to adopt new ideas.

With only 23% of respondents saying that they would turn to an EV, Nottingham was the UK city least likely to adopt this form of transportation. Residents of Norwich, Liverpool, Cardiff and Newcastle were also unlikely to choose electric vehicles. 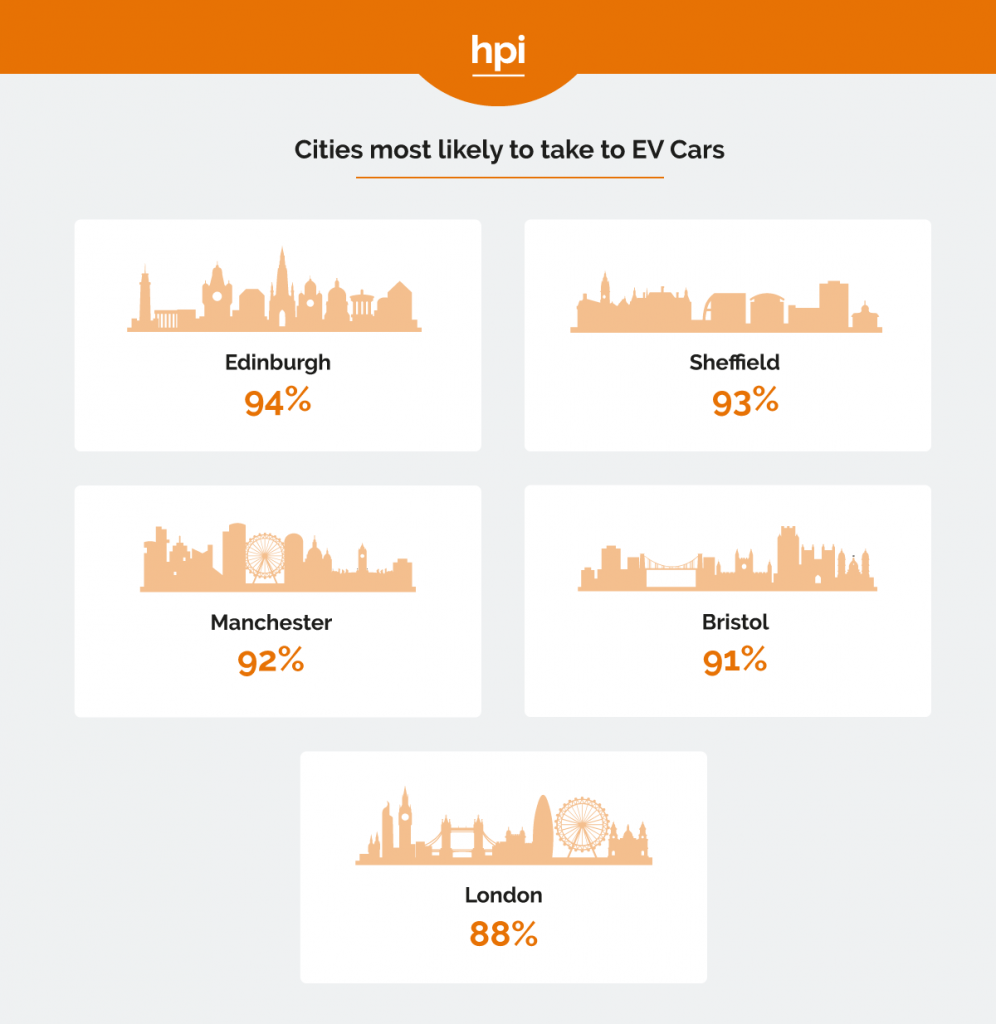 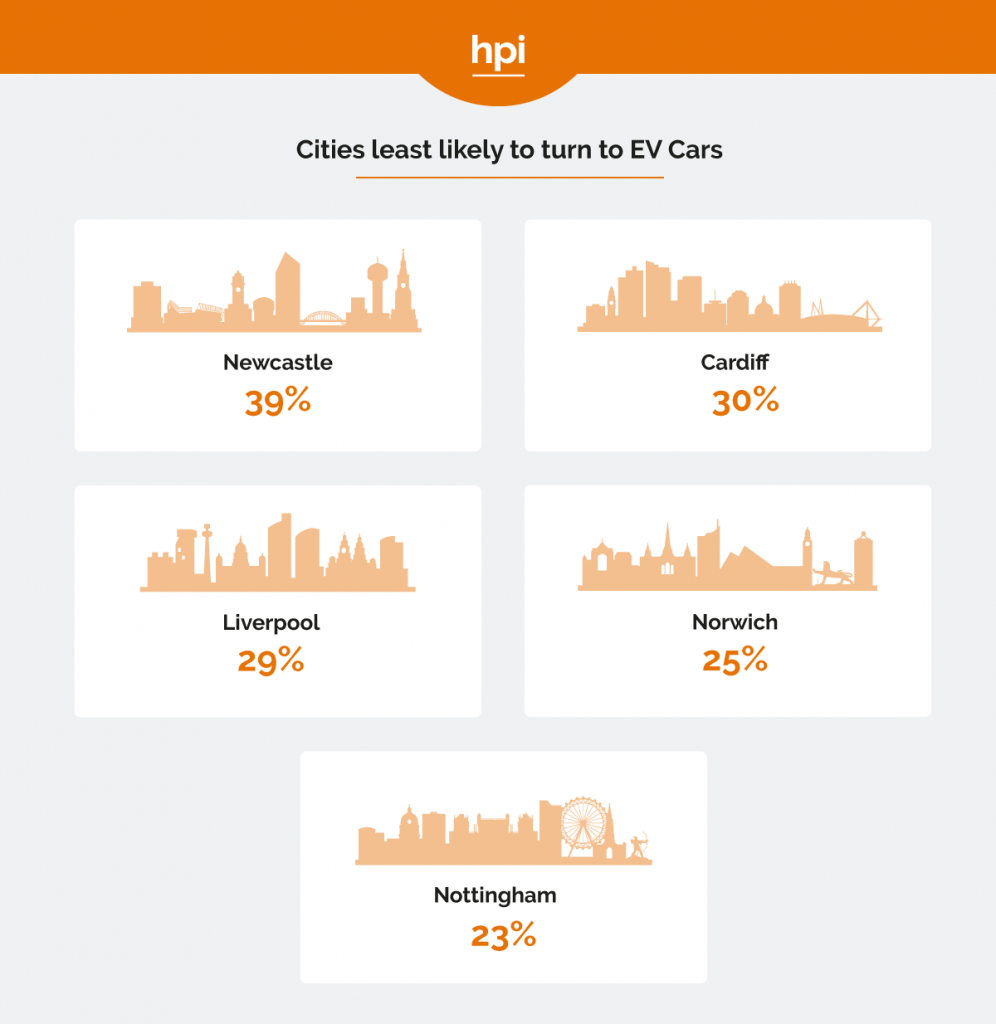 Around the world, we found that respondents in Mexico were the most open, at 93%, to the idea of electric cars. Brazil was also highly positive, with 90% of respondents there saying that they would embrace EVs.

At the other end of the scale, only 25% of Hong Kong’s respondents were positive about adopting these types of vehicles. Russia, Singapore and France also received very low scores.

These are the full international results, showing the percentage of those who would choose to drive an electric car:

Why People Aren’t Going Electric in the UK

In our survey we tackled the question of why people wouldn’t buy an electric vehicle. In the UK, the results showed that respondents are most worried about a perceived lack of charging points. However, this is a common misconception, as most electric cars can be charged from any mains outlet.

Price is also a major concern, which is understandable when considering the cost of a new EV. But it should be noted that the cost of running an electric vehicle is generally very low compared to other forms of motorised transport. So, this is perhaps another misconception.

When it comes to running out of charge and taking too long to recharge, we have found further misconceptions. Some electric cars can take as little as half an hour to recharge completely and have highly accurate gauges that tell drivers when they are low on charge.

While electric cars in some instances may have lower ranges than combustion vehicles, they are so easy to charge that longer journeys can be undertaken with confidence. So, the final top reason that UK drivers would go electric – low range – is perhaps yet another misconception to add to the list. 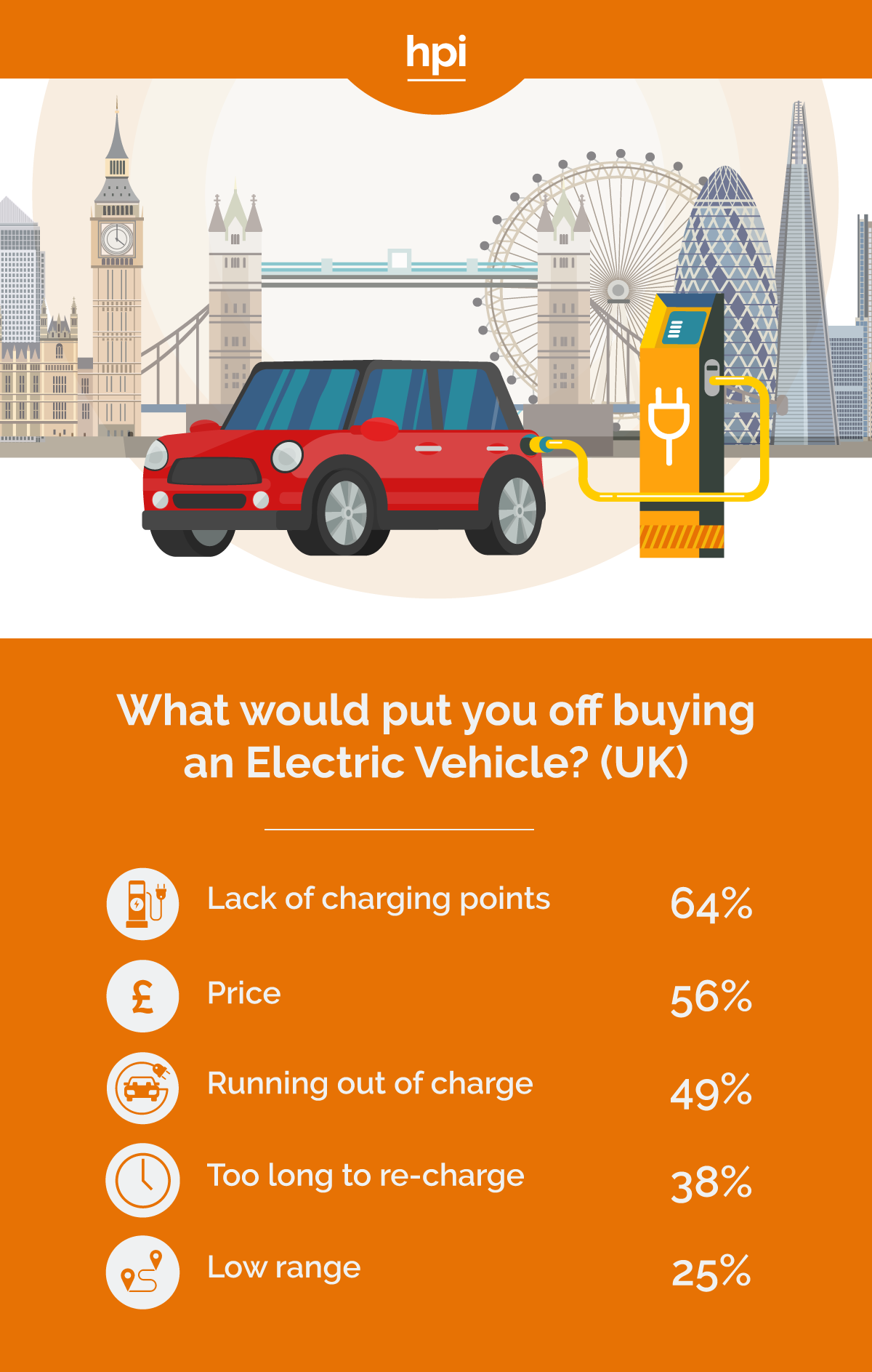 Both these beliefs are flat-out misconceptions. However, it is of interest to note that so many people hold them – even those who would choose to buy an electric car.

Chris Plumb, Black Book Editor of HPI Check, commented, ‘It’s surprising how many people think batteries needs replacing so early in their life when there is no real evidence of this. In fact, batteries seem to be outperforming the industry’s expectations.’

Globally, the reasons why people wouldn’t adopt electric cars closely followed the responses from the UK, except there was also a concern about safety. This should be seen as a misconception, because electric cars have to pass the same safety standards as any other types of vehicles.

Some international respondents cited performance issues as being a reason not to adopt an electric car. While combustion vehicles may have the edge in terms of outright performance, when it comes to driving within the speed limit, there is very little difference between the two types of vehicles. So, this could be yet another misconception.

Many of the remarks made by respondents expressed the fallacies mentioned above.

‘Not many places to charge up,’ and, ‘charging problems,’ were just two comments which reflect the misconception about difficulties involving access to electricity.

‘Doesn’t go far enough without needing to be charged,’ and, ‘I’d fear running out of power and being stranded,’ are comments based on the misconception that the range of electric cars is somehow limited.

‘Don’t trust them,’ was another negative comment from the research.

One respondent even wrote that electric cars were ‘costly for the environment,’ showing perhaps that misunderstandings about EVs run deeply amongst those who would not adopt them.

However, it should be noted that despite these misconceptions, most people (83%) are educated enough about EVs to be willing to consider driving one. And this proportion will surely increase as misconceptions are challenged. 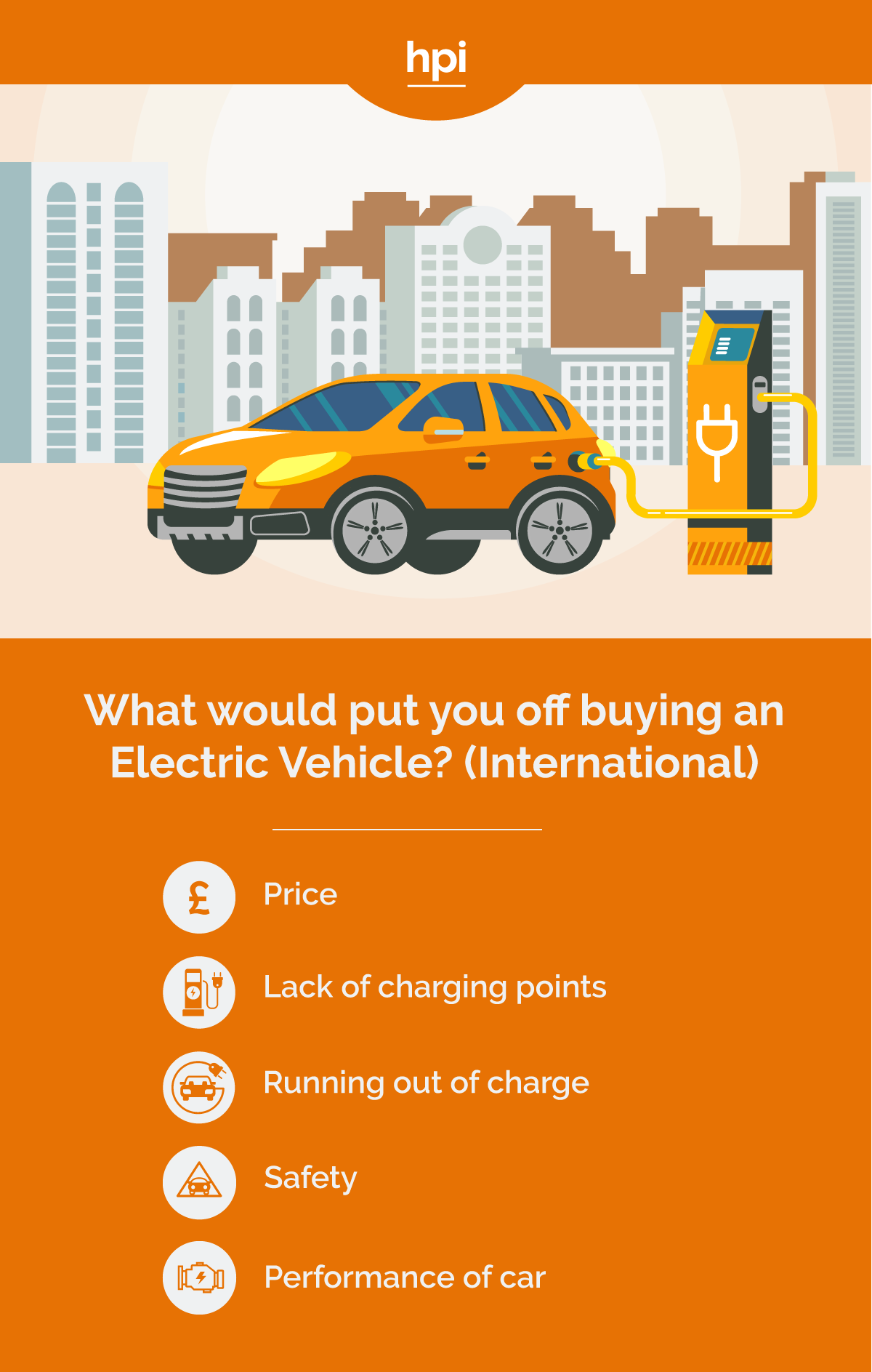 ‘People’s perceptions are changing,’ concludes Chris Plumb, our Black Book Editor. Looking specifically at the younger generation of drivers, he adds, ‘Millennials are a little more accepting of EVs and perhaps can see the long-term benefits in green technology.’

As a lasting solution to the planet’s motoring requirements, electric cars could definitely be worth promoting. It might also, judging from some of the responses to our survey, be a good idea to promote the facts whenever possible in order to tackle many of the misconceptions which have arisen around the EVs.

If you’re interested in this subject, you might also want to read our post on considerations when buying an EV. We compare different models and enable you to get a good idea of which one could be right for you.

Before buying a used vehicle it’s important to find out as much about its history as possible. An HPI Check will tell you if the car’s been involved in a serious accident, is stolen or subject to an active finance agreement. Before you commit to buying, enter a number plate below and get the facts!

Get an instant HPI Check® now